“What haven’t we seen before” is a common question we ask ourselves when beginning a new project. That question was a big inspiration for our recent “Tech Town Portland” video featuring 11 of Portland’s hot tech companies. When originally asked to showcase these companies work spaces in a new and exciting way, we thought, “huh… how to showcase computer offices in an exciting way…” However, after visiting each location, we realized how unique, alive and innovative these tech work spaces really were. We decided to use motion timelapse, super slow motion, radio controlled helicopters with our friends at ATI and a new cable system called Line Cam to showcase these companies in a new and exciting manner.

First, we dreamed up some limit pushing motion timelapse with the Dynamic Perception rails and the Emotimo pan/tilt head. We’ve done a morning traffic motion timelapse before, but what about from inside a 5th floor corner desk looking out over the intersection? 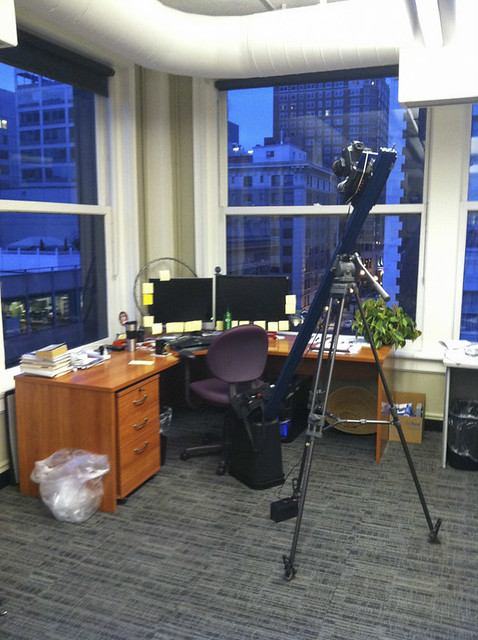 The Dynamic Perception Stage One timelapse dolly is a powerful platform for many reasons, but a favorite is it’s rigidity in the aluminum rail. We were able to stretch the 12ft rail from a computer desk to high up above the office lights. Other dolly systems require support points every 1-2 ft, but the stocky aluminum rail can support itself in a surprising amount of variations. We’ve been using the DP rig since we started with timelapse and it’s been the workhorse that’s been up in trees, on top of mountains, out on the ice, hanging off of buildings, and now inside of 11 of Portland’s hottest tech companies. We endearingly refer to the setup as “Dolly.”  Check the gallery below for more setups with the Dynamic Perception Stage One rail.

Next up on the timelapse tools was the Emotimo pan/tilt head. We got the new black TB3 unit for this project and we’ve been loving it since. It’s powerful, intuitive and affordable- what more could we ask for? We quickly integrated the Emotimo in many of our setups and scenarios and it continues to deliver. Our favorite fun discovery is that it’s powered by a Nintendo Wii wireless controller. It makes every timelapse feel like a video game! 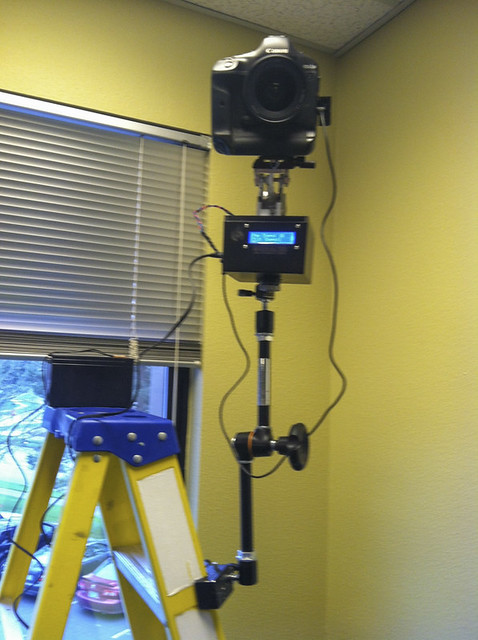 Last for the timelapse ideas was starting back up the conversation with Callie Schneider, the creator of the “Callie Cart.” We used this a few times in “Finding Portland” but with some bugs to work out- we weren’t able to utilize it for all the ideas we had. So, we bought a box of beer, invited Callie over to the office and asked if he could give us a Callie Cart version 2 and what new features he would want to put on/in it. He was psyched. A few weeks later, Callie came back to the office with a shiny new Callie Cart 2. The Callie Cart was a major star player in this production providing motion timelapse like we’ve never done or seen before. Give us a semi-smooth surface and we can roll a motion timelapse from 5 to 50 feet with pan/tilt feature on the Emotimo. We routinely explain Callie as a mix of Mad Scientist and McGyver. He was also a big help on site for some of the locations- thanks Callie! It’s currently a crazy mix of technologies, but it’s fun watching the Callie Cart do it’s thing. We’re excited to further explore the abilities of this creative motion timelapse platform. Check out the gallery for more shots of the Callie Cart in action. 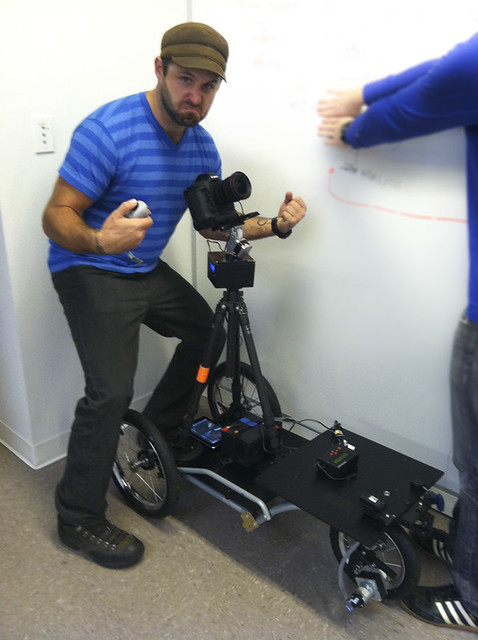 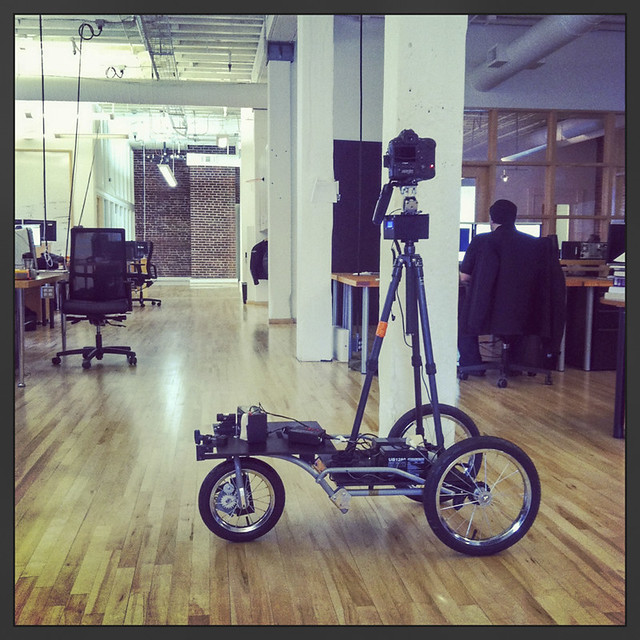 We recently added the Sony Fs700 to our camera roster and it’s been thrilling finding ways to use its “Super Slo Mo” feature. There weren’t too many opportunities to find fast action in office spaces, but we managed to sneak it in a few ways. One of them was this litter of Siamese kittens hanging out under their owners desk. Slow Mo kittens is one of our embarrassing new things we love. Choreographing a Steadi-cam slow mo Nerf gun battle at one of the offices was definitely a high point in our filming career! Between timelapse and slow motion- we enjoy showing our audience a new look on our everyday lives. 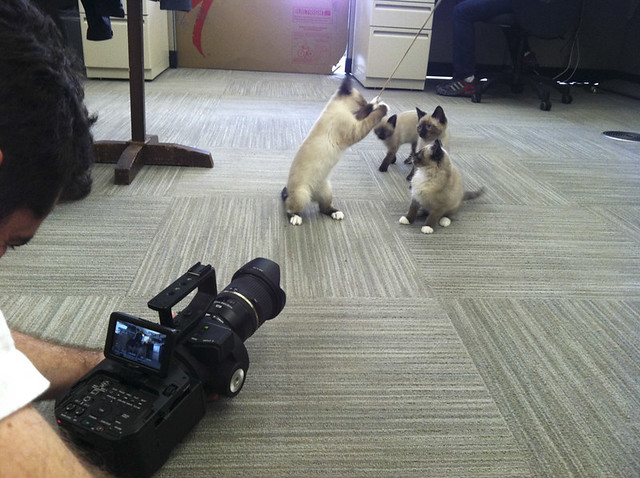 With the idea of showing things in a new way- we had to bring our friends over at ATI into this production. They can fly a remote control helicopter in and out of spaces we could never move a camera on our own with. Add to it the new stabilizing gimble they’re operating with and the footage they can capture is awesome. Anytime we can work with them on a project we know we’ll get something amazing. Go check out what they’re up to- it’s exciting stuff. 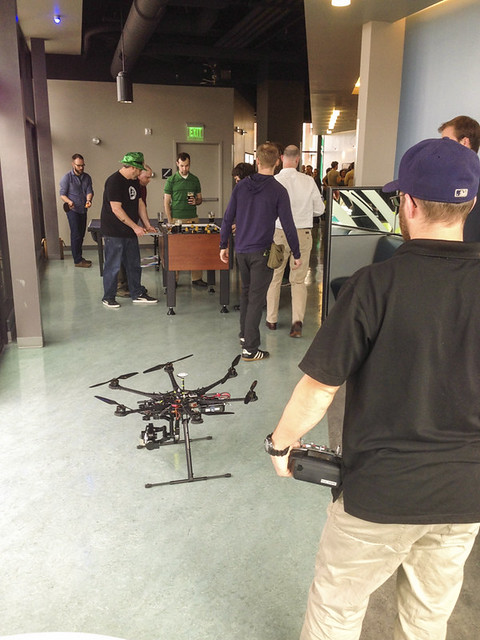 Last, is our use of the new LineCam system. Stretch a high tension cable across a space, hang an inverted wheeled cart with a pan/tilt head controlling a camera and you’ve got a LineCam. This was our first time working with them and they came prepared and ready to deliver. We were surprised and impressed with how quickly the rig can be setup and ready to go. This is another system that seems to have all sorts of potential when applied in the right application. We hope to work with them again in the future. To work with the LineCam rig, we experimented with a new wifi display system called CamRanger. It provided wireless live video feedback from our Canon DSLR to an iPad, and even gave control function of the camera. Exciting stuff. 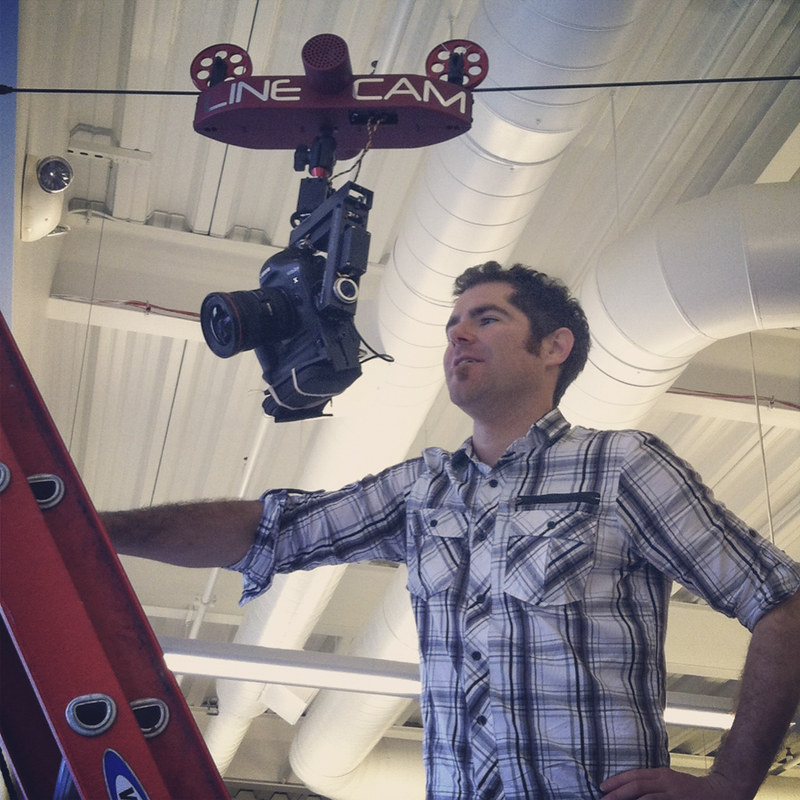 Hope you enjoyed this look into the production of “Tech Town Portland.” As always, we’re motivated by a simple question of “what haven’t we seen before?” That one question has led into working with all sorts of new techniques, tools and creative people. It’s a facet of our work we thoroughly enjoy here at Uncage the Soul Productions. Below is an image gallery of more setups in producing this video- there’s many more photos than are shown here. We’ve provided a link to all the systems we used in this production because we want to support the front-edge creative tool makers that are accelerating our industry into all sorts of uncharted territory. If they piqued your interest- check out their pages. And, for anyone interested in how we can help you in making a production of your own- shoot us an email. We’d love the chance to do something new with you.