Mending the Line in France

Mending the Line in France

We were driving along a one lane country road in the hedgerows of Normandy on June 6, D-Day.  “Just up ahead, you should see a Y in the road”, directed Frank from the back of our 7 passenger Eurovan.  It had been 69 years since he had been to this spot, and then, in much different circumstances.  Now, it was a pastoral and lush country road that gently meandered through dense thickets and quaint French farmhouse properties.  Then, it had been a war-zone.  As we rounded a bend in the road, there it was, the Y that Frank had mentioned, and we were all a little stunned by the acuity of his memory.  We all piled out of the van to learn more about this spot Frank had directed us to.  Frank immediately began to recount vivid details of how his battalion had come under heavy German artillery fire.  For perhaps 20 minutes we filmed and walked with Frank as his memory of that moment flooded back.  When the story had reached its end, we all stood there in silence, imagining the scene. 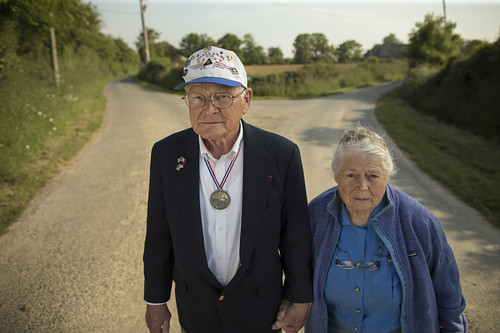 It was extraordinary to consider that not only had Frank at 90 years old returned to that spot, but had brought with him his wife of 70 years, to whom he had married just prior to his WWII departure.   Frank and Jeanne stood hand in hand right in the Y of the road.  Time froze.  The evening sun cast yellow gold ripples across the green countryside, and bird songs floated on the waves of a gentle breeze.  After perhaps a minute, Jeanne looked over to the side of the road and exclaimed, “Oooo look at those lovely wildflowers”, and brought us all back to the present moment as she ambled over to get a closer look.

I share that story with you because in many ways it embodied the experience of our time with Frank, Jeanne, and Frankie during our two and a half week trip across Luxembourg and France.  We found ourselves in constant wonderment that Frank’s life had circled back to this place, and that he was sharing it with the love of his life.  The juxtaposition of the beautiful French Normandy countryside now with the photos, video and stories of those same places in WWII was staggering.  We were all swept up in a current that delivered us to such remarkable locations, and connected us with gracious and ordinary people who expressed their gratitude and support in extraordinary ways.

Was there fishing?  Of course!  But it was certainly not about the catching, and it may not have been about the fishing either…it was about the “being” .  To see Frank and his son Frankie walking along a glassy ribbon of water meandering through serene farmlands reminded us that the fly-fishing was merely an activity through which a deeper appreciation for life and love could happen.  We discovered that Mending the Line is really a love story.  A story of the love that Frank shares with his wife Jeanne, the love that Frank holds for nature, and the love that Frank has for humanity.

The post production process is already underway as we dig into the rich archive of footage we brought back from our trip with Frank and his family.  Our current projected completion for Mending the Line is the end of the year, with a release in the early part of 2014.

We have to express our deep appreciation to Frank and his family for allowing us to join on their journey and for entrusting us with the responsibility to orchestrate their trip.  Much of the efficiency, coordination, and our connections in France can be attributed to Anna Brones, our field producer in France who worked tirelessly to make sure our project was “statistically flawless”.  We would also like to express our appreciation to American Airlines, Patagonia, Pro Photo Supply, and The North Umpqua Foundation.

AND YOU!  For this project would never have been possible without the collective contributions of 450 of you from around the world.  We are deeply appreciative and aspire to create a moving and beautiful documentary that we can all be very proud of.